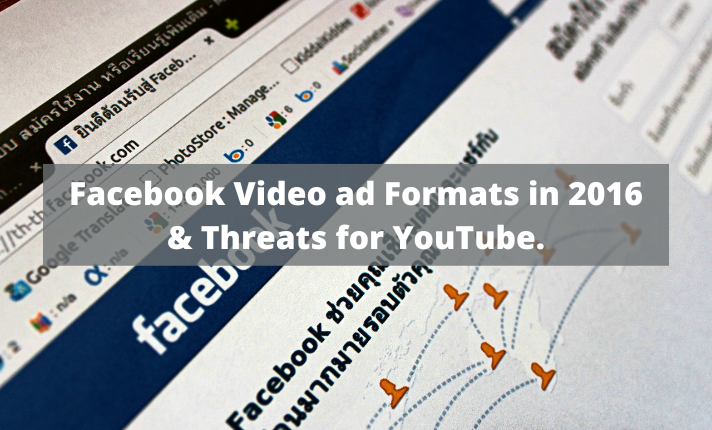 Video has always been an integral part of marketing ever since the public access of television. Brands and companies used the format to promote their products in the form of TV adverts.

Although social media has changed the way marketing and advertising used to work, the fundamental elements remain the same. Video no more is considered a burden on budget while marketing the product. In 2015 especially, video and audiovisuals took over the social media platforms and both it was one of the heavily used formats to communicate with followers and customers on Facebook as well as other platforms.

Apps and websites have been created that only support the communication among users in the form of audio or video.

Considering these rapidly changing trends, marketers are focusing specifically on creating visual content. It is necessary to understand the dispositions of your audience and create the content accordingly. Creating and producing a perfect video needs a lot of research and creative skills. For this reason, it is important to know and actually understand the kinds of videos that can be created easily in average budget.

Here is your guide for top used video formats in social media and Facebook marketing.

Videos that work best in Facebook advertising are the ones that are meant for educational purposes. These videos aim to aware audience about variety of topics. It can range from introducing overall brand in general or specific instructions on how to make use of certain features.

Informative videos are usually short, ranging from 20 to 40 seconds. The shots are fast paced and usually looped. Fashion bloggers use this type of videos to show the processes that are lengthy, for example styling hair and putting on makeup. The video only has the important shots so audience retention is high. The videos are fun and highly viral in nature. Websites like BuzzFeed, food network and many more companies that are contemporary are using these videos to interact with people.

When necessary, the video also uses titles and captions, although Facebook now has the option to produce subtitles automatically for videos in English.

Short and animated moving images are usually known as gifs (pronounced as jiff). These are extremely short animations cut out from a video or made of series of static images in chronological order.

Gifs are highly viral in nature and incorporate humor, sarcasm. They are usually used as comic versions for real life situations. It is also possible to cut them out of videos using linear editing.

There are several softwares available to produce these kind of video animations. Although they can be as short as one-second time to up to maximum five seconds they are still considered a form of video since uploaded in MP4 or mov formats.

Using right images and proper lens filters, you can create witty gifs that bring in thousands of views.

These Facebook video ads are targeted specially at office workers to be watched for work purposes. The videos are usually known as work-safe videos and do not need audio to understand the message. You can watch them without sound on and still get the whole message.

The video incorporates captions and titles for shots that need explanation, hence you can watch them in public places or whenever you do not have headphones, without attracting attention for audio on speakers.

Many professional videos are made on this format and are top organizations like BuzzFeed, Business Insider and Videospot are using it to make content. Instead of captions, titles are used to explain the context of story.

One of the most important pro of such videos is that they have the ability to reach global audience, since non-native English speakers can understand them as well.

Creating a storyboard and converting it into video is an exceptional method to bring in views. People generally avoid video ads, since they are explicitly selling something. If you are creative enough, you can convert an average ad into a story that will keep audience interested and they will be convinced to share it further.

Ads that do not look like ads are the best way to generate leads and increase engagement. The video needs to be clever and should keep in mind the values and beliefs of audience. Making such video requires creativity and a brilliant story that is relatable to audience; hence, they are forced to buy the product, even though they were not told so explicitly.

Real time videos with genuine audience input are also highly favored when it comes to Facebook marketing. If you own the brand and you are advertising it, it will have less influence on viewers compared to the situation where your customers are vouching for it.

Creating videos needs creativity but with little guidance and understanding, it is very fun filled activity. Keep in mind the five “W’s” widely used in journalism while making videos.

As I mentioned earlier, videos were a huge part of marketing and advertising campaigns in 2015. Facebook was one of social media platforms that took to this trend rather aggressively and introduced live streaming. Facebook also introduced auto-play option on videos that was set on by default, so even when you did not want to open a video and play it, it would still play if it is on your newsfeed page. This tactic was hugely successful since users open the video to watch it until end if it interests them. This of course increases the views on video and since more than 1 billion use Facebook, companies started preferring uploading videos on Facebook first and YouTube later.

This gave birth to the argument of whether the site is trying to hijack YouTube and its users. Many YouTube celebs showed frustration by squabbling on the fact that Facebook user newsfeed prefers and only highlights videos uploaded to it directly, while ignores the one that are hosted on other channels like YouTube, vimeo etc. and embedded later in Facebook.

Many internet sensations got recognition from YouTube and now their livelihood depends on the number of viewers and subscribers they receive on their channel. The videos are first uploaded on YouTube and later shared to other platforms including Facebook. Since, Facebook hinders the promotion of videos that are not uploaded on the host, it is becoming difficult for creators to reach audience, most of which comes from Facebook.

The stats show that on daily basis Facebook receives around five billion video views. This is very impressive considering that video is relatively new phenomena for Facebook.

There is one problem however, that is the metrics for Facebook and YouTube are hugely different. Any video that was auto played for three seconds is considered a view on Facebook. YouTube on the opposite focuses more on engagement so it only adds a view when the video has been watched completely. YouTube is more interested in the attention viewers pay to one video, while in the case of Facebook, a 20-minute video will receive a view even if the user watched it only for three seconds.

Freebooting is another problem posed by Facebook videos to YouTube content creators. People can pick up videos from any websites including YouTube and upload it on Facebook without giving credit to the source. This robs the original creator of credits as well as viewership on the actual host, since people have already watched it on Facebook.

Facebook made it clear that they are aware of freeboot problem. Therefore, company is working on resolving it, so any future copyright allegations be avoided. YouTube took care of the problem way back in 2007, when it introduced content ID system. The system analyzes each video uploaded on the platform and if it appears that video was copied from an already existing video in database, it automatically removes the video and notifies the original uploader. The original creator then has the authority to allow or remove it from the website.

Some stats show absolutely no effect of Facebook video on YouTube, which means that Facebook is absolutely no threat to YouTube and just like other video platforms (Snapchat, Periscope, Blab), it is just catching up to trends. The company stated that the number of people watching YouTube videos per day is up 40 percent year over year since March 2014.

Let us know if you think whether Facebook is hurting YouTube and its content creators or it is just trying to give audience what they want without compromising any other video platform.