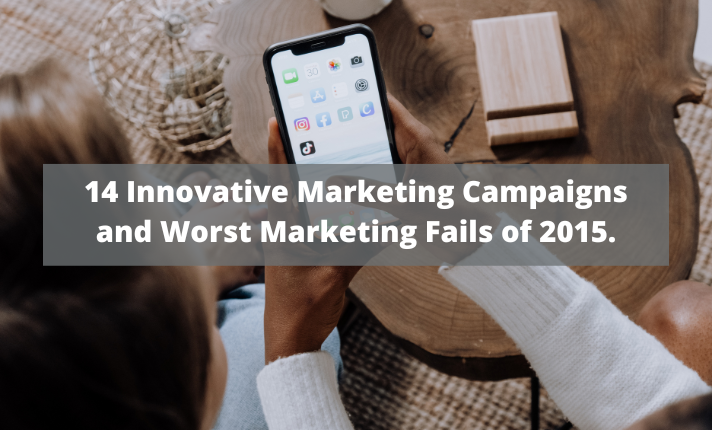 2015 was the year when marketing industry not only boomed but also took a dark turn at the same time. We saw some troublesome advertisements and scandals spread all over the internet and every single social media. The thing about digital media is that it is scrutinizing your every move every second, and when someone messes up, it never forgets.

Let’s take a look back at the most cringe worthy advertisements and marketing failures of 2015 and learn from them by avoiding them in 2016.

One of the most famous brand in America outdid itself when they came up with a fun       and harmless activity for children. The idea was to promote events throughout the  week   in a certain location of United Kingdom, during the weeklong school break.

Unfortunate for Krispy Kreme, Wednesday’s event was called Krispy  Kreme Klub (KKK) that created an uproar in the media, people started making memes and photo shopped image of Klu Klux Klan members on the ad. The media office for Krispy Kreme later issued an apology but the whole thing was a nightmare for the brand.

When Target introduced the shipment of new sweaters for Christmas, they had something unusual about them. Instead of normal Christmas themed sweater, Target decided to go a different way and printed “Obsessive Christmas Disorder (OCD)” on the sweater. Although it was meant in good humor and to lift people’s spirit for Christmas, public was not amused. People immediately responded and called Target insensitive of the people who are serious victims of the disease.

Target was also accused of trivializing a serious psychological disorder just to soar its sales. Even with all the backlash, the brand stood strong and kept selling the sweaters. However, the spokesperson for Target, Josh Thomas did say that the company “apologizes for any discomfort.”

When Airbnb wanted to improve their image after vote, on whether Airbnb should  regulate the rentals more strictly or not, it did not turn out so well. The company put up  a couple of passive aggressive messages in the form of billboard and bus stop  advertisements.

The ads came across as suggesting the people of San Francisco to do their civic duty.  People did not take that well. It is fairly normal for giant brands to pay giant taxes, so  when $12 Million amount of tax money was highlighted; it attracted a lot of attention. The company soon realized its mistake and apologized by saying the messages gave out the “wrong tone.”

Bloomingdale’s is one of the top names in fashion and departmental store industry in America. People on social media were pretty upset when an ad from the company was published with tagline saying, “spike your best friend’s eggnog when they’re not looking.” A male and female model are featured in the ad, with the female model looking away while the male model is looking at her.

People protested that the date encouraged rape culture and suggested male population to make a move on the girls when they are not paying attention or noticing them. As the attention drew, Bloomingdale’s issues Twitter apology saying, “We heard your feedback about our catalog copy, which was inappropriate and in poor taste. Bloomingdale’s sincerely apologizes.”

Bud Light is America’s favorite beer and is a product of Anheuser-Busch brands. The  campaign “Up For Whatever” was intended to raise the carefree, easygoing feelings for  people who consume it. However, the campaign turned in to a marketing nightmare when  the bottles appeared with an added slogan saying “The perfect beer for removing ‘no’ from  your vocabulary for the night.”

People picked up on that and started complaining that this was yet another example of advertising promoting and encouraging rape culture. People responded immediately on social media and started the hashtag #UpForConsent, advocating the importance of consensual sex.

Apology was later issued by Alexander Lambrecht, Bud Light’s vice president saying, “It’s clear that this message missed the mark, and we regret it. We would never condone disrespectful or irresponsible behavior.” The statement was posted on the Anheuser-Busch website.

Heinz accepted that the URL was previously used by company for a competition that ran between 2012 and 2014. After the competition ended, they gave up the URL, which was later acquired by adult entertainer in Germany. Apology was issued in a Facebook post that said that company “really regrets the incident”. Heinz also sent the customer a personalized Ketchup bottle as compensation.

The giant retail company had a recent set back, when they baked a cake with the  dressing of Islamic State of Syria and Iraq’s (ISIS) flag. The story behind the cake is  that a person from Louisiana got frustrated when his request for a cake with the  confederate flag was denied. He later asked the company’s representative to bake a cake  with the terrorist organization’s flag and received the cake without any refute.

Chuck Netzhammer, the person behind the request uploaded a video on YouTube  explaining the whole story. The video that received more than half a million views in three days was later removed from the website. He points out in the video holding up the cake, “That’s an ISIS battle flag cake that anybody can go buy at Walmart … but you can’t buy a Confederate flag toy, with, like, say, a Dukes of Hazzard car.”

An apology published later from the retailer’s spokesperson, John Forrest Ales said, “Our talented bakery associates take pride in what they create for our customers. It’s unfortunate one customer thought to take advantage of an associate who did not know the flag and its meaning. This cake should not have been made, and we apologize for the mistake.”

Urban Outfitters made the headlines when they introduced a shirt with white and grey  stripes in stores. The shirt reminded people of the holocaust and the way prisoners were  forced to wear the design. The shirt also had a pink triangle, which was just like the pink  badge to identify gay men.

Anti-defamation League (ADL) called out the company with urge to stop selling the  shirts. The letter written by ADL to Urban Outfitters voiced the concerns over the  “insensitive design and the company’s periodic use of products within the realm of Holocaust imagery.” The product was later removed from the online stores and website.

The International Pancakes company had a bad day when they tried to be funny by comparing their product to women breasts. The picture was posted on Twitter with the caption, “flat but has a GREAT personality”. Public was offended and called the company sexist and misogynist.

Later that day, the apology was issued via Twitter that said, “Earlier today we tweeted something dumb and immature that does not reflect what IHOP stands for. We’re sorry.”

The campaign “Wall and Chain” was launched at the 25th anniversary of the  fall of Berlin Wall. A short animated film was shot that brought the story of  belonging and global conservation to life. Airbnb highlighted how its customers were  helping the German economy by supporting local culture.

Powerful content was uploaded on social media to bring awareness and drive  engagements on the film. Along with that, three other videos were shot to introduce “behind the scenes” of the real family.

The campaign was highly appreciated around the world because of powerful story telling technique and aim to build a world where people can “Belong Anywhere”.

If we talk about real marketing campaigns, Adobe won this year on social media, when  people went fanatic over the infamous “Dress”. Everyone was determined to prove they  knew what the dress’s color (white and gold or black and blue) actually was.

Every small and large brand found a way to promote themselves by using hashtag #TheDress, but Adobe won with one scientific tweet that put the controversial color to  rest by getting into the technical details and proving the actual color using “Adobe color.”

The global campaign “Shot with iPhone 6” was initially a contest on social media where participants were asked to take picture from their iPhone 6 camera and submit on the website. As it started getting the heat, Apple started using the billboards to further promote the campaign, by projecting breathtaking pictures on them.

The reason it got so much attention was due to the direct customer involvement to market one feature of the iPhone 6 i.e. its camera. It also received top honors at Cannes Festival.

To introduce their new car “Civic Type R”, Honda launched “The Other Side” campaign, which used interactive parallel story technique. The video is about a person living a double life and features the Civic but switches to a parallel storyline featuring the Type R when you press and hold ‘R’ on the keyboard.

Honda was awarded Gold Lion at the Cannes Festival in the category of Interactive Video, and video earned global appreciation.

Barbie’s campaign “You can be anything” had the aim to teach little girls dream big and anything. The message behind the campaign was that women are independent and have choices. Barbie has usually connected with promoting unrealistic body images and idea of perfection for girls. This campaign asked the girls from around the world, what they wanted to be and then incorporated that in the campaign.

When it comes to marketing, companies need to consider the power of social media. Digital advertising has completely change the definition of best and worst. The creative people no longer decide what is best or out of the line. It is up to people and internet communities, whether they approve an ad or not. Therefore, the meaning of best and innovative means “popular among people” and “worst” means what people do not approve of.