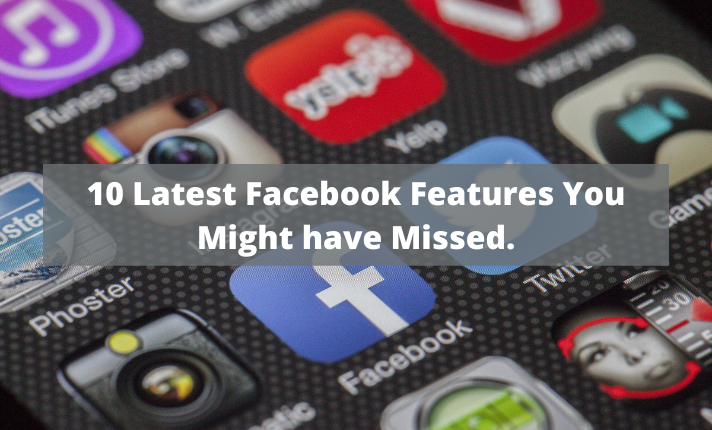 Facebook is all about people and enhancing user experience of the site. It is no wonder that the company is always two steps ahead in its research and knows what users are going to need before they even know it themselves.

It is going to be ten years by the late end of this year, since Facebook became available to the public. Even after such a long time, the site tends to be the most contemporary thing on the internet and in the digital world. There has never been a time when Facebook looked old or lost its place in social media world. The biggest reason behind such tremendous success is its new features; options that it provides users to customize their timeline and wide range of settings that let you post content protect your privacy just the way you want.

Although some of the features like change in interface of user timeline received very strong opposing views from users, it did not make them quit or delete their accounts. With the passage of time, everyone has adjusted and gotten pretty comfortable with using it.

I am going to list down some of the features that the website introduced in last year.

Facebook announced the launch of short profile videos last year, where users “(sic) will be able to film a short, looping video clip that will play for anyone who visits the profile.” Do not confuse it with .gifs although it is a kind of similar thing, except for the fact that you still cannot upload a .gif file as your display.

The idea is being tested on few profiles of users based in United States and United Kingdom, who own iPhones.

Another feature that has been introduced by Facebook is availability of built-in filters that people can now use while uploading a picture. This, of course does not take away the option of uploading a pictures that has already been edited by an outsider third party software.

This might look a little like an inspiration taken from Snapchat that only allows users to take pictures from its own camera using the limited number of picture and video filters like puking rainbows, breathing ice and few more.

The filters on Facebook however are more than just regular filters, which are used to enhance your picture. These are temporary filters used on special days or events where there will be a time limit, and after the limit, filter will automatically be removed. In a blog post Facebook wrote, “When more than 26 million people used our Celebrate Pride filter, it was more apparent than ever that people use their profile pictures to show who they are—even if it’s just for a moment in time”. The only problem is changing a picture after short while might raise the question of the user’s commitment to the cause as it might appear that he / she is “done supporting it with the profile photo.”

To remove users from getting into such complexities, filter will be temporary and will be removed automatically after a certain period of time.

The buttons are a way to ensure a free two-way connection between business and customer in real time. Instead of going on the website or googling a business that you found on Facebook, you can contact them directly there. The “contact us” button appears right under the cover photo and was recently updated to appear bigger, clearer and brighter.

The other call to action buttons include “send message” and “call now”. Facebook is working on bringing more such buttons to increase engagements of users with businesses.

These two sections are an absolute jackpot for business that sell products and services. The sections are a recent addition to new features on Facebook and aims to promote e-commerce. These features will directly help retail businesses to sell off their product immediately and effectively, as research has proven that more than half the time, people make buying decisions while using social media.

The products and services will be listed under the sections respectively, which Facebook believes will give users a better idea into the business or product a company is selling.

Research showed that people spend more than 14 hours a month browsing Facebook on their mobile app. The apps has over 1 billion downloads on smart phones. This means that approximately one billion people access their Facebook profile through the app.

These results have motivated Facebook to work on the mobile friendly interface so it is easier to navigate through pages.

Facebook advertisements are the best way to promote your business to right audience in a very cost effective way. You can use these ads to simply spread awareness or deliver content inside the potential and targeted audience’s feed.

Products ads are however, a new feature added inside Facebook ads. The only difference is that instead of promoting your whole website or brand generally, you can now shift your focus on products.

This means having the convenience of uploading you whole product catalogue at the same place with separate campaigns for each. Using all the information provided, Facebook will show the specific products only to the people who are or might be interested in it. This method is not only effective but creates easiness for customers who would not need to go through 100 of products before they find the one, they are looking for.

Visual Content has taken over each and every single social media site. These visuals range from simple images to infographics, illustrations, Gifs, short videos and talk shows. Visual media tends to have a better effect on audience and people interact more when the post is in imagery or moving post.

Live video streaming feature allows people to communicate in real time with a person sitting in front of a phone on the other side of word.

Videos are also more attractive and effective way to influence people. They give a genuine feeling to the user and builds a healthier relationship between brand and viewer.

When a word or phrase is repeatedly used by users and is mentioned in Facebook news or posts frequently, it becomes a trending topic. The trending word is mentioned above the post that is related to it.

It initiates the interesting point of views around topic and you can create content on the trending topic to stay in the news and inside your followers’ newsfeeds.

The Android supported app is a lighter version of Facebook that runs easily on phone with low memory or old hardware. One of the best thing about this is that you do not need to install messenger separately because it is included inside the app.

The Company recently has launched a virtual sports hub on Facebook, which is like a social media version of sites like ESPN. Any big sporting event happening anywhere in the world can be followed via sports stadium.

Data shows that sports remain to be top social media topic that is able generate discussions and engagements. When it comes to live events and posting second by second updates, Twitter is the most effective platform. Limited number of characters also make it more efficient and concise. Snapchat also covers some major sporting events happening inside western world and America mostly.

Facebook interface is built in a way where live content might not work that well. The feature is currently only available in U.S on the iOS app and covers American football games only. Facebook is however working towards expanding the feature not only into the other parts of the globe but also aims to include more sports like basketball and cricket.

In a blog post Facebook said, “Sports is a global interest that connects people around the world. This product makes connecting over sports more fun and engaging, and we will continue listening to feedback to make it even better.”